Article Gallery
While on a trip to Utah in November, one of our stops was at DPS in Salt Lake City. We were looking for three things here: a first glimpse of DPS's 2020-21 lineup; a tour of the new facility (our first visit to this location was while they were moving in); and some inside intel on the company's major changes over the past couple months, not the least of which is the departure of its founder, Stephan Drake.

This location became DPS's home in early 2019. It was intended to give the company an opportunity to expand in-house production and create its own cores. The old facility was in western Salt Lake, in an industrial area near the airport, but it didn’t have the space necessary for DPS to build everything it wanted to. Having been in both facilities, we are confident in saying that the flow of this space is more organized and has a smoother transition as the skis go from one part of the process to the next. It is in an area of Salt Lake that is being revitalized with the obligatory coffee shops, CrossFit gyms, and microbreweries and surrounded by active lifestyle shops such as Evo and Level Nine Sports. (Also, we will send you a swag package if you can find the office on the first try.)

As soon as we arrived, we noticed that the faces were all familiar from previous visits, the team of engineers that has been making DPS skis is intact, and the DNA of Stephan’s influence is still in the the design. Going forward, DPS intends to clarify ski models better, with less crossover in names and an intent to be progressive while returning to the roots that made it DPS in the first place. The elusive ski boot that it had been working on is no longer in the plans; we imagine it will be up to Stephan whether he takes the concept to his next venture. 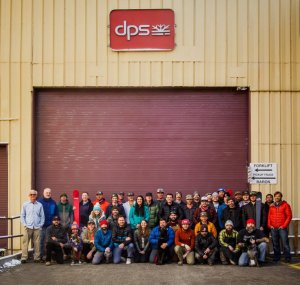 When we asked about Stephan’s departure, there was no sense of an elephant in the room; instead, there was a great deal of respect and a feeling that the company is committed to continuing with a vision that will honor the roots established by Stephan and co-founder Peter Turner. We had a chance to talk directly with Alex Adema, the new president and CEO, about his friendship with Stephan that goes back to college days at Colorado College more than 20 years ago. The friendship was rekindled five years ago when Stephan offered him an opportunity to pursue their shared passion for skiing by joining the DPS team. While Alex has accepted this role as part of the transition, he reflects on what brought him there in the first place and has nothing but high regard and gratitude for Stephan. He reinforced the commitment to use his experience and training over these last five years to lead DPS to achieve Stephan’s vision with a very talented and committed team, building some of the best skis on the market.

We can confidently say that the buzz around the factory and the offices left us feeling like the death of DPS had been greatly exaggerated. We got a chance to preview an all-new collection and construction concepts that are different than anything DPS (or anyone else) has done. Of course we would like to share them with you, but you have to wait until they are released at Outdoor Retailer in a few months. What I can say is that these skis will be built at its facility in Salt Lake. Stay tuned for upcoming reviews and inside intel on these products for 2020-21. Exciting stuff is coming from DPS!
Reactions: gski, Rainbow Jenny, ADKmel and 1 other person
Share:
Facebook Twitter Reddit Pinterest Tumblr WhatsApp Email Share Link

PS: I think I am going to like the new format for articles on PugSki!
Well, the elephant in the room is that Drake has left DPS. If everybody at the company respected his vision and wanted it to continue and the company was run by his college friend, I doubt he would have made the move. There is gotta be more to this story.
Unofficial guide to Squaw Valley: squawguide.com
I’m guessing that his college buddy leverged him out and not voluntarily....sad if true

Kindbuzz said:
I’m guessing that his college buddy leverged him out and not voluntarily....sad if true
Click to expand...

Alexzn said:
There is gotta be more to this story.
Click to expand...

Obviously there is more to the story, but I can confidently say that those we talked to were not involved with Stephans departure.
Point your skis where you want to go.
If that doesn't work, go where they're pointed.
Bob Barnes
​