Backstory: About a month ago, I contacted Transpack about becoming a sponsor here at Pugski. During the conversation, Gene, the owner, mentioned that they had just signed Glen Plake and that Transpack would be coming out with a signature line. "Excuse me?" I said, "Could you repeat that?" Yes, they signed the original bad boy of skiing. 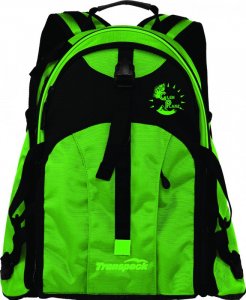 Not one to miss an opportunity, and knowing that Glen was in the Tahoe area from time to time, I asked if we could get some time with him and announce the press release. After 2 weeks of phone calls and e-mails, we were able to schedule an interview with the fabled Glen Plake at his home mountain of Mammoth.

Front story: Glen’s relationship with Transpack works for a few reasons. First, Glen likes independent companies; he prefers to support a company that has a product that he wants to use, and he is not into conglomerates. Second, every year when leaving SIA, Glen makes sure his pile of swag includes a bag or two from Transpack. Third, many of the Elan reps Glen works with also represent Transpack, so he is always around the product. Finally, Glen works with a lot of the Mammoth junior teams, and Transpack seems to be the kids' bag of choice.

So Glen felt that a relationship with Transpack just made sense: it is a product that is respected, one that he likes and uses, and he is confident that attaching his name to it and teaming up with Gene and Transpack will create a great partnership. 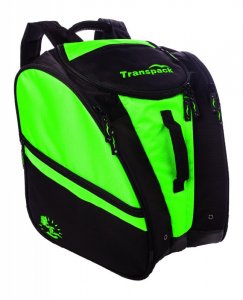 WHERE: Transpack gear is sold at snow sports specialty stores across the United States.

WHY: Glen Plake started skiing at 2 years old and began redefining the sport not long after that. Like few others, he understands what is needed from a boot bag at all stages of a skier's life, on the mountain and on the go. That's why this ski legend chose to partner with Transpack on a stylish new line of boot backpacks for both children and adults. Glen's progressive thinking jives perfectly with Transpack, which became North America's snow sports luggage leader by introducing such innovative features as its proprietary Isosceles Storage System. This Transpack invention systematizes gear packing for individuals and families seeking less stress and more fun for their time on the slopes — after all, Glen is the poster boy for "less stress and more fun." This is reflected in the unique Glen Plake-inspired freeskiing illustrations on his namesake Transpack gear. Glen's background includes roles in Greg Stump’s early films (including Blizzard of Aahhh's and License To Thrill), stints on the U.S. mogul team, and a successful career as a professional freeskier.
Share:
Facebook Twitter Reddit Pinterest Tumblr WhatsApp Email Link

There are no comments to display.
You must log in or register to reply here.