I-70 closed between the tunnel and Silverthorne.

Noodler said:
I-70 closed between the tunnel and Silverthorne.
Click to expand...

There’s going to be so many crashes tomorrow with a lot of liquid and temps that aren’t terribly cold.

nay said:
There’s going to be so many crashes tomorrow with a lot of liquid and temps that aren’t terribly cold.
Click to expand...

Ken_R said:
Roads look very clear at this hour is it gonna dump later on?
Click to expand...

Yea I checked LL webcam and there is an inch and it’s barely snowing. More drama so far at home, went up to Denver this evening and it was like monsoon season with 35° temps. I just got back in and don’t have the energy to prep for a 5am departure when it looks like dust on crust. I think we’ll just plan an end of week sun fest instead. 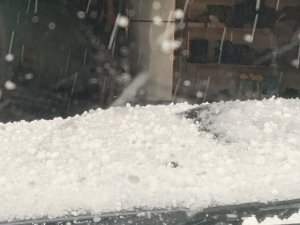 5" at WP and it stopped snowing. Storm warning in effect till noon so it could pick up again. But so far not that promising. More like slush on crust.

LL claimed 6 with 4 on the cam and it’s slumped to 2 since then.

Not having any FOMO on this one.

A good reminder that it's more reliable to plan around the sun than snow this time of year.

The next few days look fantastic. Can't be too bad today. Look at all the ants on Willies: 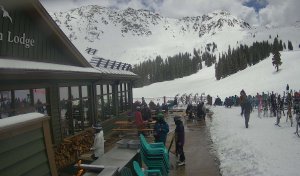 First chair. Loveland powder was good. About six inches, medium, not too wet. (A lot of first tracks on Pettitor 120s.)
Up in the fog, lift 9 still good, though an adventure, pretty much, with the usual poor visibility, but good snow conditions, while I was there. Smooth sailing.

Usually, I would have gone to WP, but this season MJ lifts have been jammed, long waits; while on the WP side, few lines, better lasting powder/conditions.
But the WP side is now fully closed, 0/55 runs open. So no outlet there for me to like.

Loveland lifts opened in the usual order, but on time. I skipped 4 & 8, but watched them across the way, to see they opened well, no hitches.
As has often been the case this season, the mid week lift lines were pretty long in some places, especially at first, compared to previous years. But not so much the upper lifts - just Chet's.

Soon I was doing south chutes, which were great - thanks, @Noodler, for that tip - just waiting on lift 9 to open.

Man, you had to be careful up there on the Ridge: the coverage was so much thinner than in a normal year, but it was still good, with some caution. All that terrain held up pretty well, especially with a ski that's tank-like good in crud but also plays and floats.

Oh, and it was just about perfect weather, overcast, not too cold and not too hot - for both skiers and the snow. No wind.
Last edited: Apr 29, 2021

Basin skied pretty decent yesterday for only 4 inches plus a trace all morning. Standstill over the pass in the early AM as statey buffered for tow truck pulling out semi, didn’t deter from a nice beach spot. Pali was great all day from start to end at about 1 for me. Best turns were defiantly on the east wall with some surprises in the Cellar before patrol closed the last of gullies area for the season I’m guessing. Far upper beavers closures will be next along with more west zuma. Burgers, brats and beers to close the day as the sun came out. Tacos will make an appearance next time. I’m also calling Winston, the cowboy corgi, the Mayor of the basin beach.

Today didn't go at all to plan. I had initially planned to join up with Pugs at Loveland.

A last minute request from an IT client had me working last evening with a plan to be available in the morning to pick up any loose ends. I got confirmation of 'all's well' and left on the 10:54 bus to ski. 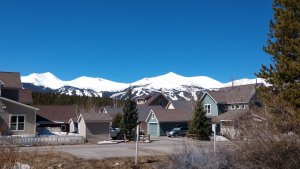 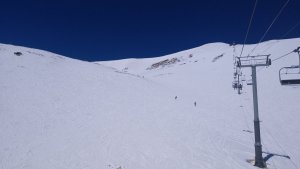 Imperial looked petty nice. Lake chutes were open as was Whale's Tail and beyond. 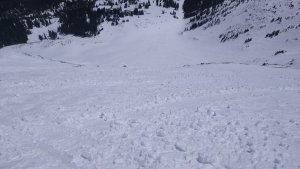 Looking down CJ's I invoked the memories of skiing friends on the IR list or skiing in the great beyond. 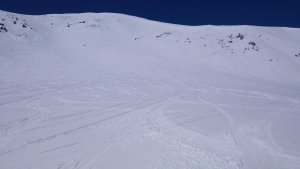 Looking up at CJ's with Y-Chute, Magic Carpet and Art's looking very white. Unfortunately a lot of Art's and towards the south had slid. White but super-lumpy. 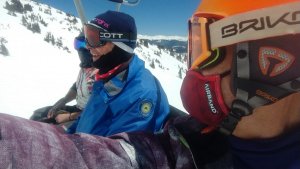 And riding the lift with CJ. This was on the way for another lap and more memories before my descent. 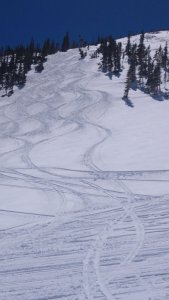 That had one track when I started my day. I was happy to get the skier's left line which had some nice rolls.

Then it was down to catch a bus to my office to resolve the IT problem that flared up during my ride up with CJ. Back on the bus after a quick resolution to the problem.

And there is time to get on Imperial for one more run. This time I'll be refreshed. I was getting tired in my earlier session and the time off worked for me. 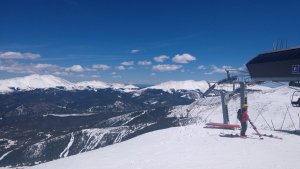 Another day for viewing Pikes Peak. This never gets old. 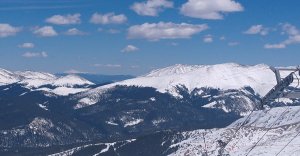 As I only got one Imperial run on my remaining time was on Ptarmigan and Outlaw starting through the krumholtz in fine fresh sloppy wet powder. 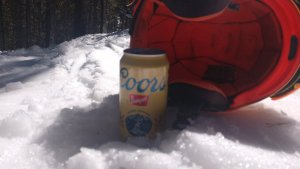 I hope to meet up with Pugs tomorrow. I'll try to be irresponsible and make it.
Last edited: Apr 29, 2021
If I ask questions, it is because I seek clarity, not argument.

It's the main hike-to run that you have to start from the traverse. There is no (practical?) top-down access. Or A-Basin. Depending on what you were asking about.
If I ask questions, it is because I seek clarity, not argument.

Willies Staircase is on the East Wall hike-to terrain in the picture I posted. See the ants hiking up:

tball said:
A good reminder that it's more reliable to plan around the sun than snow this time of year.

The next few days look fantastic. Can't be too bad today. Look at all the ants on Willies:

The snow held up really well ... sun stayed away until early afternoon, then it chowdered up quickly (but most snow had already been skied by then), then sun went away again but I had quit by then. I was pleasantly surprised by the quality! Yes, not deep enough or heavy enough to totally cover the crust, but there were plenty of good turns to be had.

Skiing Tuesday was ... well, I've had worse. This little aspect in Zuma wasn't too bad after a quick inch dropped mid-day. I think @Noodler described it as "velvet ice," which is pretty close. (Although it was kind of nice having an empty hill.) Here come @SkiNurse, @Tricia, and @Wendy. 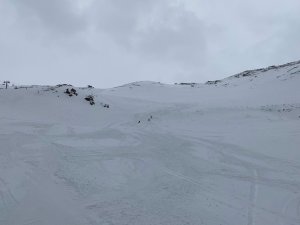 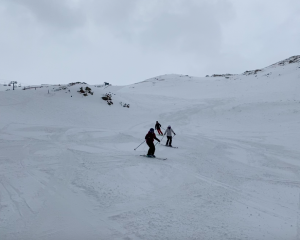 A slight change on Wednesday: 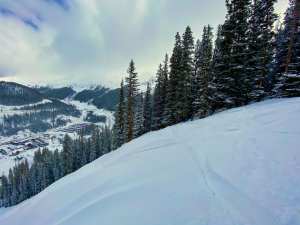 Heading to Loveland for the first time on a weekend this Saturday. Are they still doing reservations online to keep crowds down? I couldn’t find anything.

palikona said:
Heading to Loveland for the first time on a weekend this Saturday. Are they still doing reservations online to keep crowds down? I couldn’t find anything.
Click to expand...

No reservations needed (and you might even pick-up a cheap/free lift ticket if you wander around the parking lot... ). 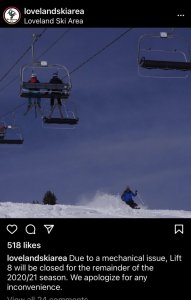 You just pegged my sarcasm detector. 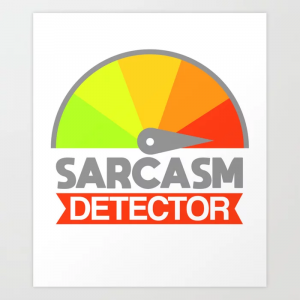 If I ask questions, it is because I seek clarity, not argument.
S

Went to Winter Park/MJ for bluebird spring skiing today. Wow. (Even though the WP side is closed for the season.)

On a non-powder day at least, Nobody there. No lines. Nobody on the slopes. Except up on Pano - closer to the usual there.
Few exposed rocks or dirt. Warm. Soft bumps, and a few fine groomers.
And the snow was pure, smooth cream cheese for some hours, run after run (a very good thing).