Compared to its stouter brother the Numero Uno N°1 RC, the N°1 SC is a lighter and softer version in the proven 121-71-106 shape. It is a great option for lighter guys or women who might not want a women’s ski. It is also an option for Level I or II instructors looking for that special teaching ski or preparing to take their next exam; it will make any turn shape, at any speed, ideal attributes for an instructor. Build quality is what you would expect from a boutique builder such as Blossom, so there is no compromise in on-snow feel.

Who is it for?
A lighter skier looking for a technical ski on the finesse side of the scale.

Who is it not for?
Stronger, more powerful skiers -- but that's why Blossom offers the N°1 RC. 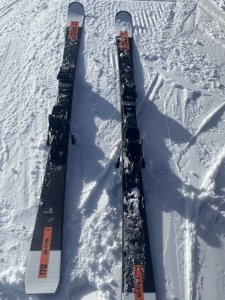 Long Term Update: I had a chance to spend more time on the SC this past week when @Blossom Skis brought its demo fleet into town. I am trying to think of another ski like this on the market, and my brain is tired of being racked: a pure finesse mid-shaped carver. As I said in the initial review, this is a great ski for an aspiring carver, an instructor, and male and female finesse skiers. It is light and playful and just wants to please the skier. Turn initiation is easy, but the ski can be overpowered by stronger skiers.

I got out on my 176 SC's yesterday.
A guy your size would be better served with the 176's but I totally agree with your description.
What you describe as a pure finesse mid shaped carver is spot on.
Good damping too so the vibration doesn't kill your knees.
Like you, I have never met a ski quite like this.
In 176 it is the perfect frontside carver for a mid-size, oldster who wants to ski at age appropriate speeds. (Like under 50)
It also skids easily when you are in a mood or situation to let them drift a bit.
Ono Nui!

Dakine said:
A guy your size would be better served with the 176's but I totally agree with your description.
Click to expand...

I am much better served on the RC in the 176 but thats not the point of me reviewing the ski, it is who it's for and I think you address that too. Another option is pull the plate and/or the system binding off, toss on a pair of Pivots and you have a killer bump ski.
If you want SkiTalk.com stickers, send me a PM.​

Reason I said that is there was a big difference between the 170 and 176 Whiteouts when I had both.
I expect the same thing applies with the SC's too.
Happy New YEAR.

OK, time for an update. I bought a pair of 170 cm No 1 SCs from Phil about a month ago, so it’s time for a longer-term update. They are tuned with 1* and 2* bevels. I generally prefer softer-flexing skis with a 12-16 m sidecut radius and like a narrow ski on the front side. My daily driver ski for tele is a 164 cm Blossom Great Shape with the same dimensions. As noted elsewhere, I am a male, weigh 145 lbs, 6 ft 0 in tall, and am 68 years old.

I love my SCs. They are energetic, quick, bouncy, playful, powerful, fast, stable, damp, connected to the snow, utterly predictable. They provide lots of rebound have a good strong tail. They do precisely what is asked of them and urge you to go faster.

Basically they ski like the soft-flexing slalom skis (dialed to 9 and no 11) they are. They engage and come around quickly, so they are wonderful for short turns in the fall line. Balance and timing are critical, though, as they are so quick that I don’t have a lot of time to correct before things get out of hand. That said, they are remarkably versatile for a ski with their short radius chops. I compared them to an (OLD) pair of Rossi 9S WCs with a 9 m sidecut and soft tip and so skied quite similarly but the Blossoms were clearly superior to the Rossis in every way.

The SCs have a 14 m sidecut but ski more like a 10 or 12 m ski, probably due to the soft flex. That, along with strong torsional muscle, allow the edges to engage very quickly and hold tight through the turn. They then deliver strong rebound and edging above or in the fall line brings instant and strong acceleration. And it doesn’t matter if it’s firm, boilerplate or icy – the edgehold is tenacious.

Despite the quick 14 m sidecut radius, they manage long turns very well. That said, you can’t drop your hip and load them up in the fall line because if you do, they grip, flex and turn hard. They are much, much more stable in high-speed turns than I expect from a 14 m ski with that much edge hold and rebound. And they don’t wander on flat run-outs as much as I had expected.

In moguls, they are very well-behaved in soft bumps but get progressively grabbier as the bumps get firmer. The soft flex mitigates that a bit but it also helps them grab and go. My skills working on the delicate feathering that it takes to ski firmer bumps on them are a work in progress.

Cut-up, lumpy groomers are handled with aplomb at slow and high speeds. No surprises, no getting thrown around. I have never ridden a better ski on scraped-off groomer with a mixed bag of slick boilerplate and loose piles of scraped-off.

At 71 mm underfoot, they are not powder skis, but hold their own and are still fun in up to 8” of sierra pow. The soft flex probably helps in that department. I recently had a very nice day off piste with 6-8” of moderate sierra powder over coral reef.

Finally, they are great to teach on. It is surprisingly easy to skid turns for beginners and they will slide sideways at will but, being what they are, the occasional flat 360 is a challenge. And I would want to be on something else off-piste on a big powder day.

And my co-worker has yet to forgive me for letting him ride them, spoiling his Head iTitans (new this season) for him.