One of the best regional shops makes a selection of next year’s skis – and this year’s, in the case of models that are coming back or are still unsold in the shop – available to its customers to “test” on a day in spring. I showed up for this year’s event at Saddleback and have provided some impressions below. The brands on offer were Rossi, Dynastar, Elan, Blizzard, Salomon, and Fischer. Customers get to try skis; shop gets the written notes to help inform next season’s inventory. (They provide pads and pencils.) Kudos to Happy Tunes for involving customers in this kind of positive feedback loop.

Conditions were honestly pretty gritty - thus the post title. On the menu were a few rock-hard refrozen groomers and a couple of bump runs saved from being unskiable only by a couple centimeters of new snow over the ice and exposed non-snow materials. (March was not kind to Maine in the snow department.) Mostly for this reason I stuck – with one exception – the narrower side of the width spectrum. An argument can be made that the setup was perfect for evaluating hard-snow skis.

As is usually the case on these occasions, ski choice was as influenced by availability in the moment of specific models and lengths as it was by any rational “plan.” Moreover I was feeling physically crummy all morning, which definitely affected my skiing and my testing. Let’s just say that “getting after it” did not describe my approach to the mountain yesterday. Please take this into account.

A note on the pics: I intentionally applied what is arguably too much filter to help with reading the fine print on the sidecut numbers.

Elan Ripstick 88 172cm **
Strong family resemblance with my current Elan skis (Wingman 82 CTi and Ripstick 96 Black). Compliant but solid on edge. Easy to bend into an arc but surprisingly grippy. Less nervous than I expected. It does have a speed limit. Very easy in the bit of off-piste we had. Narrow tail improves its versatility IMHO. Not for Clydesdales. Skis a bit short. This would a superb Saddleback “bumps and stumps” ski. 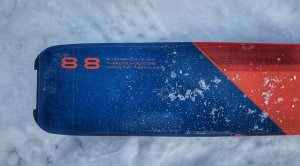 Blizzard RC Ti 160cm **
Expected to be into this. I wasn’t. Suspect an issue with the tune. Judgment suspended.

Elan RSLX 165cm **
Like the Blizzard above, this ski was not “on it” the way I expected. (Then again, neither was I. So …) Again I suspect some dulling back of the tips – not something you want on a rock-hard day, on a slalom ski. That said, once I made some adjustments I liked this ski. Good snow feel. Quiet. Sneaky tail that would bend like a soft ski but then launch you like a stiff one. Definitely needs some speed. Obviously at 165 this was probably built for someone bigger. Would love to try the 160 with a serious tune. Criticism: it’s just stupid to have the asymmetrical tips on anything that is not a full-on race ski. I honestly think Elan would be attracting a much bigger following among serious skiers without this kind of low-brow showboating. I say this as an Elan fan.

Fischer The Curv GT 168cm 2022
This is a ski that I didn’t do justice to because I had a bit of vertigo and basically just needed to go take a nap. Even so, there were some obvious personality traits here. One was the factory tune. (I asked the rep if that’s what it was. “Oh yes.”) This one really hooked up, thank God. Of the skis I tried on this day – including two of my own – this was the only one that I really would not want to bring into a mogul field. Big square stiff “my way or the highway” tail. On the hardpack it was confidence inspiring but also demanding. Lots of flexibility in turn shape. For me it worked better in medium to long turns, but I also wasn’t pushing super hard. Unlike the GTs (below) this one had that typical Fischer “tell me about every microscopic particle under the base” snow feel in spades. I don’t happen to prefer that particular attribute, but I also understand that it’s all preference. Skis long. Can’t imagine skiing the 182 like @Erik Timmerman.

Fischer RC One 82 GT 166cm 2022
Along with the Ripstick 88, this ski is one that I would unhesitatingly recommend to a fellow lightweight or an intermediate. Super easy to handle in all conditions. I would probably size up if I were to buy this ski. The 166 was a little bit unsupportive for me at speed, and presumably in any kind of weighty 3D snow. Otherwise extremely likeable and adaptable. I feel compelled to mention that the graphic design on this ski was beautiful – better in person than on line. Snow feel is noticeably un-Fischer-like in this construction, which was a plus for me. One of the questions on the shop template was “Would you buy this ski?” My response was, “Not sure, but I would definitely sell it!” I can see LOTS of skiers liking this ski. @AmyPJ, something tells me you should try this one.

Fischer RC One 86 GT 168cm 2022
Whooo-we. All the love for this ski, here and elsewhere, is well-deserved. Rep said that the construction is the same as the 82, but with a 0.7mm sheet of Titanal instead of 0.5. It feels like more than “that” different. At least it did on this day. Just does everything well and easily, but with far more precision and teeth than the 82. It’s hard for me to imagine who wouldn’t like this chameleon. I’d think instructors would be all over it.

Rossignol Black Ops Escaper 172cm 2021
I was hoping to try this but the binding would not accommodate my boot size.

(In general I was a little underwhelmed by the interactions I had at the Rossignol station.)

Salomon QST 98 176cm 2022
I was hoping to try the Stance 90 or - even better - one of the S/Force skis, but Salomon brought no skis below the mid-170s in length, and I was pretty sure that a Stance in a 177 or whatever it was would be too much for me. (I only saw one S/Force and it was huge.) Along the way the guy talks me into trying this soft snow ski. (It’s a 176 but about half the ski is off the snow.) Okay. Fine. The tip and tail on this thing have serious rise and (especially) taper. None to my surprise, this ski was pallid at best on the hard groomers of the day. My Ripstick Black 96 would have carved circles around it. In all fairness, of course, that’s not what it was designed for. Therefore I took it into some bumps, where it was idiot-proof. Very pivoty and compliant. This would be a fabulous tree ski on a soft snow day. Probably a hot mess in real substantial crud, though.

Dynastar M-Pro 90 170cm 2021
This ski has that crazy-looking Cham / PowerTrack -style tip rise and taper. Fortunately it skis less stupid than it looks: Best snow feel in the bunch (subjective); arc-to-arc turns decent. Slinky and noodly in minor moguls. Did not get it into deep troughs, where the “beefy” quality Phil reports might have emerged as a downside. I did find this one bit hard to modulate in brushed “instructor turns”; it was inclined to chatter. Potentially a great all-rounder for Saddleback terrain. Even so it didn’t speak to me.

Blizzard Thunderbird R14 Ti 165cm 2022
Sleeper of the day. I wasn’t even aware that this model was coming. Fans of the much-loved Supersonic IQ will recognize its lineage in this ski. SO confident on edge. Even though this is a 13m ski you can make any size turn with it. Despite the squarish tip – apologies for chopping that off in the pic - it was surprisingly okay in easy bumps. But you don’t get a ski like this for bumps; you get it to ski railroad tracks on groomers. The 165 length felt spot on for me. Guys who usually ski an actual SL ski in a 165 might want to size up 5cm. Others should go with their normal carving ski length of choice.

To summarize the high points:

I love reading reviews from folks I’ve skied with. I know you know how to work a ski Tony, so it was great to get more validation on the performance of the Fischers.

That is the sound, recorded live on location in its native habitat, of Maine Snow Grits™️

Great reviews!
The RC series are in my radar for my all-mountain ski next year. I’m more interested in the 86, partly because I’ve made great friends with my S Force Fever which are 80 under foot. It’s unfortunate you couldn’t get on an S Force.
Spoiled Utah skier-Snowbasin is my home!

Always love your reviews, @Tony S. You don't test skis ... you taste them, just as you do wine.

Great reviews Tony. I agree that the RC One 82 is really good looking this year. Oh and yeah, that Blizzard Thunderbird is a lot of fun too.

Tony S said:
Elan Ripstick 88 172cm **
Strong family resemblance with my current Elan skis (Wingman 82 CTi and Ripstick 96 Black). Compliant but solid on edge. Easy to bend into an arc but surprisingly grippy. Less nervous than I expected. It does have a speed limit. Very easy in the bit of off-piste we had. Narrow tail improves its versatility IMHO. Not for Clydesdales. Skis a bit short. This would a superb Saddleback “bumps and stumps” ski.
Click to expand...

That tip loos awfully wide compared to the tail. Apparently there's a left/right ski design with more rocker on the outer edge. Did you play around with this?

How does it compare to the FX85?
Thread Starter
TS

nemesis256 said:
That tip loos awfully wide compared to the tail. Apparently there's a left/right ski design with more rocker on the outer edge. Did you play around with this?

How does it compare to the FX85?
Click to expand...

I didn't mess with switching skis. This was a speed-dating kind of event. I think the narrow tail works great in bumps and in tight spaces where you don't want any inadvertent carving if you get your weigh back a little too far.

As for the FX 85, I didn't do a back to back test but I would guess the Ripstick has slightly better carving chops - not that that's saying much. The snow feel is very different. I happen to prefer the more old school "I am made of wood" more low-frequency feel of the Kästle, but others might not.

pal·lid
(of a person's face) pale, typically because of poor health.
feeble or insipid.

For anyone else on my vocabulary level.