A group of quick-thinking medical professionals in the right place at the right time were able to prevent tragedy during an event on Big Mountain last month. On Jan. 6, a 31-year-old Colorado man went into sudden cardiac arrest while participating in a ski mountaineering race at Whitefish...

On Jan. 6, a 31-year-old Colorado man went into sudden cardiac arrest while participating in a ski mountaineering race at Whitefish Mountain Resort.

All within seconds, the doctors and nurse practitioner caught up to Sanders.

Hoppes said there was zero hesitation between any of them, and they immediately began checking for a pulse. They determined he had no pulse and quickly realized it was a life-or-death situation.

Hoppes began CPR, and they alternated every few minutes to ensure they were performing high quality CPR.

“I was on the mountain and not expecting to do CPR in the middle of the woods, but once you initiate CPR, it all comes back to you, and you just go into the rhythm and the routine, and it becomes second nature very quickly,” said Desimone.

To prevent fatigue amongst themselves, one was holding for a pulse and the other two were alternating between giving chest compressions.

They said as they began the life-saving efforts, another racer skied down to alert the Ski Patrol.

The medical professionals said it took Ski Patrol roughly 10 minutes to reach their location with an automated external defibrillator.

The AED advised for a shock to be administered. However, after the shock, Sanders didn’t regain a pulse, and no further shock was advised.

Hoppes said the AED most likely didn’t advise for an additional shock because at that point Sanders had been lying in the snow and his body remained cold. He believes Sanders may have had a pulse none of the professionals were able to feel.

Everyone involved was able to load Sanders onto a Ski Patrol toboggan.

“Then came the trickier part, which was getting him down the mountain while continuing all of these resuscitation efforts,” said Hoppes.

The whole way down the mountain, they continued with chest compressions.

The professionals described the terrain as being full of hills. They said with all four of them on the toboggan it was very heavy, and it made getting up the hills very difficult. When they reached a new hill, some people had to physically push them up.

They said thankfully, everyone who participates in competitions like this one is in good shape, and they all did what they had to do to get Sanders to the bottom of the mountain.

After 30 minutes, they made it down to the base of the mountain, where a waiting ambulance team gave Sanders an epinephrine injection, which brought his pulse back after 40 minutes.

He was then driven to Kalispell Regional Medical Center for further evaluation. Hoppes rode with Sanders in the ambulance.

He said he noticed Sanders tried to pick up his head a few times while in the ambulance, and he thought that was a good sign. However, the survival rate for someone suffering from cardiac arrest outside of the hospital is low. The chances of that person being discharged without any long-lasting disabilities is almost unheard of.

Hoppes said he was able to meet Sanders and check in on him at the hospital a few days after the event.

Before he was able to see him again, he heard reports of Sanders talking and walking, and Hoppes said he couldn’t believe it. He had to see it with his own eyes.

Sanders said, “It's absolutely unreal -- just think of all of the stars that had to align for me to be right there at that time.”

“I teased him, it's either good that you are fast or that I’m slow, however that worked out,” said Hoppes.

Sanders said he can’t thank the medical professionals, the Ski Patrol and everyone else involved in the event on Big Mountain enough.

“They poured their lives into me, and I wouldn't be here without them, and it just means so much to me that they were there,” said Sanders.

Sanders was released from the KRMC intensive care unit on Jan. 13, and he is currently recovering with family in Minnesota.

He said he hopes to be back skiing sometime in March, and he will definitely try his hand at Whitefish Mountain Resort again.

Officials would like to remind everyone just how important it is to know basic life-saving skills.

February is American Heart Month, a time when all people can focus on cardiovascular health.

Wow!!!! 4 people on a toboggan, giving CPR, while it's moving? It's hard to imagine. That's one lucky hombre. And some skilled professionals.

What a great story! He is very fortunate indeed.

Great story and outcome. Thanks for sharing.
Let's all try hard not to be offended. With 7 billion souls running around, it's easy to trample. Take the high road; smile; life's too short.

I choked up and had tears in my eyes.... Nice story.
Thread Starter
TS

More info
11Alive.com WXIA: With no pulse for more than 30 minutes, Minnesota native survives thanks to quick action. 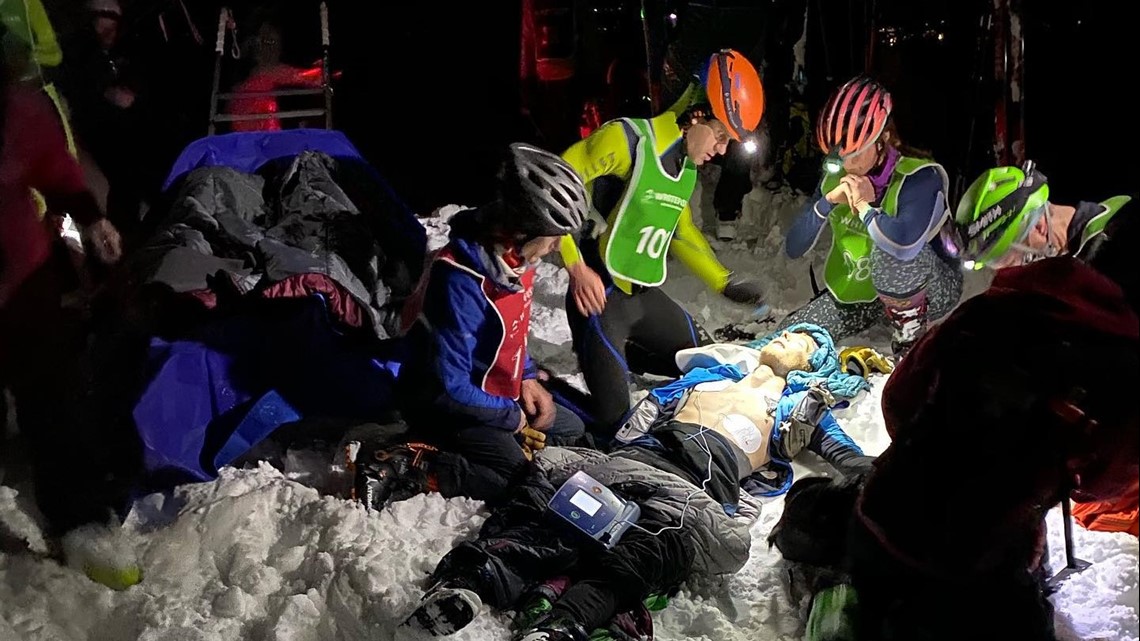 With no pulse for more than 30 minutes, Minnesota native survives thanks to quick action

Three medical professionals step up when Erik Sanders goes down during a mountain race.

What do I know; I'm just some guy on the internet.

40 minutes with no pulse? In our service that’s called “dead”.
It is better to go skiing and think of God than go to church and think of skiing -- Fridtjof Nansen
Thread Starter
TS

Maybe the cold helped? (not a medical person)
A Local's Guide to Whitefish
http://www.wmr-guide.com

That story is incredible. I cant believe I didn't hear about it in the community or on the lifts at all!

Wow, just wow!!
Point your skis where you want to go.
If that doesn't work, go where they're pointed.
Bob Barnes
​

Location
Under the Top Gun skies

Sibhusky said:
Maybe the cold helped? (not a medical person)
Click to expand...

As someone who has played a doctor on the radio, yes that is correct ;-)

A sincere shout out to everyone who has dedicated their life to the medical profession, at every level and to all members of the ski patrol on every hill, big and small. THANK YOU!
You must log in or register to reply here.
Share:
Facebook Twitter Reddit Pinterest Tumblr WhatsApp Email Link