Because of Covid, I ended up condensing most of my ski season into four days at Whistler. It involved the least public transportation and other Covid uncertainties, and the free accommodations right on the mountain sealed the deal. 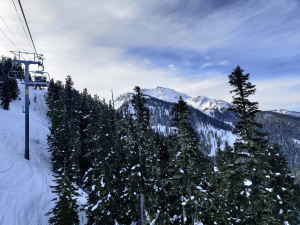 We started off from Creekside on a sunny and warm Saturday. We had heard that you needed to get in line on the weekend before 7:30, and that was certainly true. By 8, the line had stretched from the gondola through basically half of the Creekside village. However, the line moved fast and the time passed quickly as we chatted in the lift line. There were clear social-distancing cones that most people obeyed, and staff was good about enforcing masks. We took the gondola up and then immediately got on the big red chair, which inexplicably had no line. the view of Whistler peak was quite remarkable. We took a few runs on the Harmony lift, then went over to Blackcomb in the peak-to-peak gondola to meet up with a few other friends. 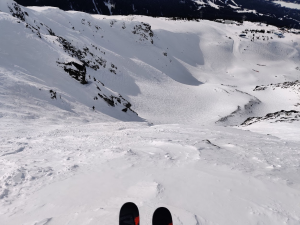 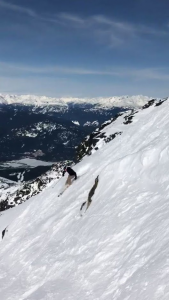 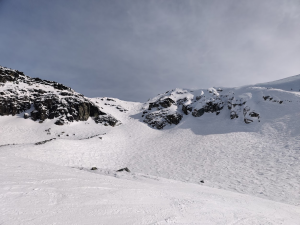 Soudan Couloir/Couloir Extreme was one of the few runs I had heard about before arriving. It was steep and bumpy, with a long, fast and open runout. There are several entrances, so basically pick the spot that has the coolest looking wind lip. It is also a good idea to ski it in the afternoon, as it was in shade most of the morning.

Here's a fun little chute that gets you from the top of the 7th heaven chair to the top of Soudan:


Cliffs underneath the Creekside 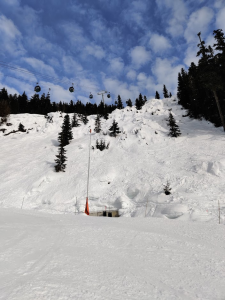 I learned pretty quickly that "cliff" signs at WB either mean "really cool, unique lines" or "an actual cliff". the signs underneath the Creekside gondola were definitely for the prior. It was also striking how much the snow changed with altitude - in the alpine the snow was light and fast, but on the lower lifts it was wet and heavy. 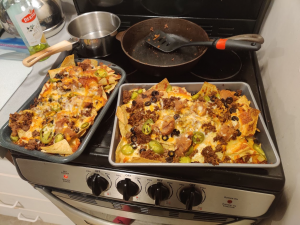 Covid meant zero eating or drinking out, so we sufficed with homemade nachos and margaritas.

The next day: classic BC weather 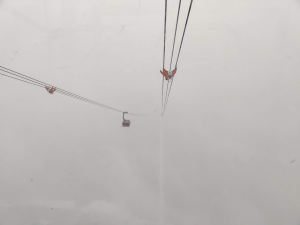 It rained down in the valley and snowed all day in the alpine on Sunday. No lines in the morning, but the alpine lifts never ran because of wind, so the lower lifts got crowded later on. Still, we skied every possible moment, and the weather gave me a chance to explore the glades.

Cool snow in the woods off of the Crystal lift: 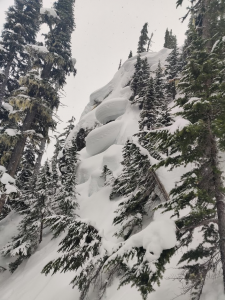 Tricky lines in the woods off of big red lift: 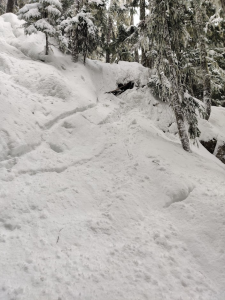 I got the very last chair up on the big red lift, and was more than happy to take a long, hot shower back at the cabin. It had snowed ~20cm on the mountain that day, and the next day's weather looked beautiful, so there was a lot to be excited about. 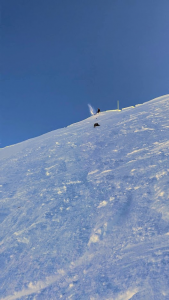 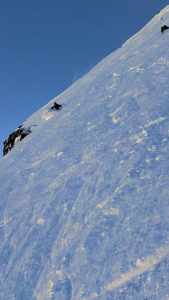 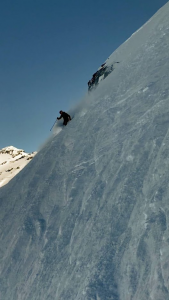 Practicing our steep skiing photography on Soudan Couloir (the angles may or may not be exaggerated...) The full run is here:


Glades in the Crystal Zone 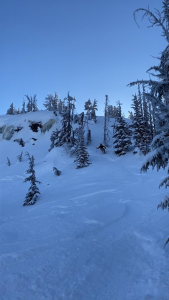 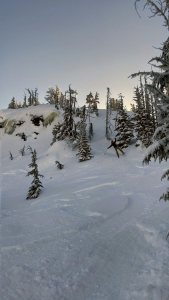 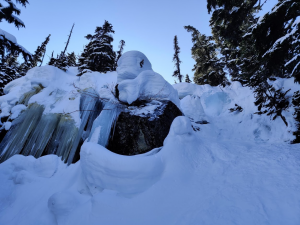 The place with the best snow and the least tracks was over in the glades off of the Crystal lift (Blackcomb). They are tight, steep, and unique (basically an east-coast skier's wet dream). It is possible to get seriously cliffed out (and they will charge you for a rope rescue in "cliff" zones), but if you go slow and plan ahead several turns, there are a lot of cool lines and fresh snow. Here's a clip in a burned-out section of the woods that was skiing particularly well:

Whistler Peak from the Whistler side of the peak-to-peak 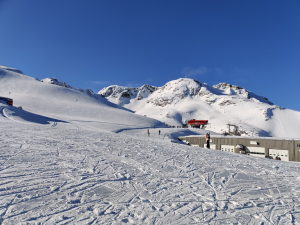 Blackcomb Glacier - take the t-bar and then hike to get up. It is well worth it. Also, look for the ice caves! I didn't, but they are very cool 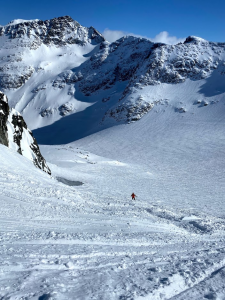 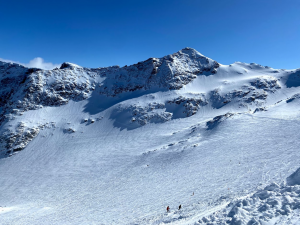 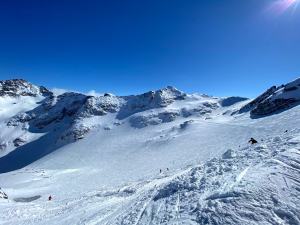 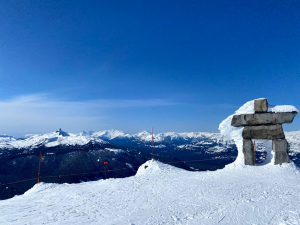 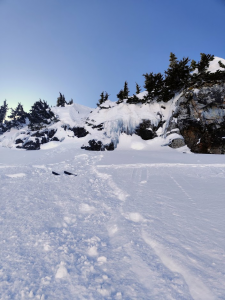 Off of the top of Whistler in prime viewing location from the line of the Peak Express chair lies a band of cliffs known as "air Jordan". It provides good entertainment while you wait in line! People cheer for skiers that send the cliffs, and cheer even louder for spectacular wipeouts. A word of caution if you decide to try the cliffs - follow someone that knows them well. It is very easy to get disoriented at the top, and many of the tracks lead to places you do not want to go. I decided to test my mettle on the lower cliff bands. My stiff 88mm skis dove in the snow, I double-ejected and was thrown a good way from where I landed, but I was able to get up fine. I only hope I was able to provide some entertainment to the skiers waiting in line.

"The Coffin"
Another notable line off of whistler peak is the coffin. You take a very sketchy traverse across the lift line and stick to skier's right (there is another line to the left). After several hop-turns, you are met with a steep, straight chute called the coffin. At that point, all that's left to do is point 'em downhill and fly. Near the exit, there's a small cliff drop, but I couldn't even feel it at the exit speed I was going. There is a clear runout, and if you careen left, there is a large, open uphill pitch you can use to shed speed. It is adrenaline-inducing, but if you do it, make sure someone is there with a camera! I stumbled upon it alone, and didn't feel like doing it again just so I could get a few pictures or a video. Here's the chute from the bottom (from another run): 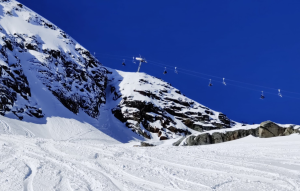 Unknown Face off of the back of Harmony, looking toward Whistler Peak 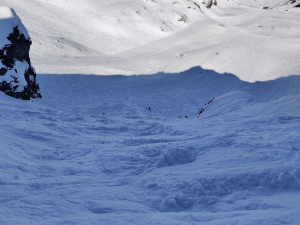 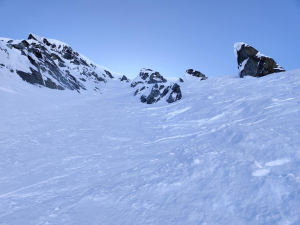 Another steep an notable unofficial run can be accessed by a short hike from the top of the Harmony lift. I know it has a name (an old guy that I shared a 6-seater chair up with told me it, but I forgot). Whatever it is called, it is a properly steep run with a bad entrance and a loooong way to fall if you mess up. 10/10. 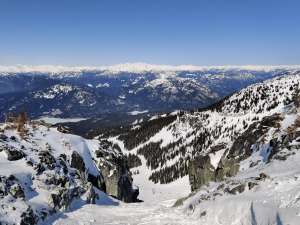 Pikalolo can be accessed from the top of 7th heaven by traversing past the entrance to the Soudan Couloir for a ways. Not white as challenging as Soudan, but unique. You can get a good view of the entire face from the Glacier express lift.

There is several days' worth of terrain to explore in Spanky's Ladder, which is accessed by a short hike off of the Glacier express lift. The traverse out on the glacier road is not bad at all - not hiking necessary, but lots of people like to stop at the sign at the bottom to regroup, have a snack and take in the view.

The ridge (it might be called "chainsaw ridge" on the way to Ruby bowl): 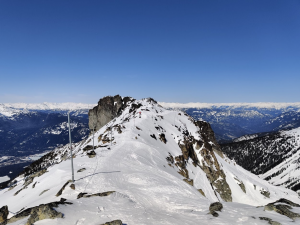 After four days of skiing hard, my body was certainly feeling it. WB is big, and it will certainly test your skill as a skier. The peak-to-peak rides provided a pleasant break: 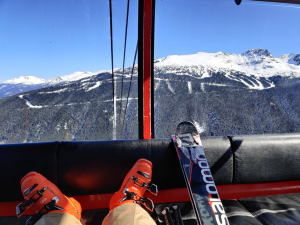 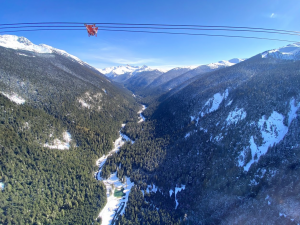 I greatly enjoyed skiing at Whistler. The terrain was epic, the snow was good, and it was certainly big enough. I was surprised at how much fresh snow was there, especially in tight, steep trees and in steep skiing above exposure. It's an easy mountain to recommend for someone looking for consistently good snow, convenience and terrain for all abilities. For a true adventure, WB is a bit too civilized, but for a chance to get some good turns in, I was more than happy with it.

Great report! I'd love to get back to Whistler sometime...
Ski resorts are not supposed to be shiny!

dbostedo said:
Great report! I'd love to get back to Whistler sometime...
Click to expand...

Go to WB in early to mid April when the crowds are gone and everything is on sale.

With my Sun Peaks season pass, I get 1/2 priced lift tickets so I'll met you there.
To view a map of Sun Peaks Resort, click on my Location in my signature.
Sun Peaks website:https://www.sunpeaksresort.com/explore/sun-peaks-in-winter
Unofficial Guide to Sun Peaks:
https://www.SkiTalk.com/ams/unofficial-guide-sun-peaks-bc.149/

Great report. Makes me want to back also. You lucked out on the weather! Only one milk bottle day.
Thread Starter
TS

DanoT said:
Go to WB in early to mid April when the crowds are gone and everything is on sale.

With my Sun Peaks season pass, I get 1/2 priced lift tickets so I'll met you there.
Click to expand...

This is good advice! Probably great weather for walking/mountain biking in the valley by then too

JShort said:
This is good advice! Probably great weather for walking/mountain biking in the valley by then too
Click to expand...

By early May (possibly late April) the WB Village is into bike season in the valley, ski sales are over and one of the two mountains is shut down due to lack of skiers/boarders, so it's early April that is the best time of season at WB, imo.
To view a map of Sun Peaks Resort, click on my Location in my signature.
Sun Peaks website:https://www.sunpeaksresort.com/explore/sun-peaks-in-winter
Unofficial Guide to Sun Peaks:
https://www.SkiTalk.com/ams/unofficial-guide-sun-peaks-bc.149/

It is my understanding Chainsaw ridge is to skiers left of the Saudan, within it is hawaii 5 O Bushrat among others
Whistler Blackcomb

Great summary of some of the steep stuff at WB. Who'd you convince to get all of that video? They did a good job.
Thread Starter
TS

Seldomski said:
Great summary of some of the steep stuff at WB. Who'd you convince to get all of that video? They did a good job.
Click to expand...

Towards the end of 4 straight days of skiing with zero breaks for food, water or anything, friends were more than happy to stop and film for a few minutes!
Thread Starter
TS

DanoT said:
Go to WB in early to mid April when the crowds are gone and everything is on sale.

With my Sun Peaks season pass, I get 1/2 priced lift tickets so I'll met you there.
Click to expand...

The crowds are REALLY gone this year! It's too bad

JShort said:
The crowds are REALLY gone this year! It's too bad
Click to expand...

The B.C. Chief Medical Officer shut Whistler/Blackcomb early due to Covid cases until April 19. WB was due to close Whistler April 18 and leave Blackcomb open until May 24 but now WB has decided to not reopen Blackcomb on April 19 and just keep the skiing closed; probably saved then some $$ by staying shut down at this point in the season.
To view a map of Sun Peaks Resort, click on my Location in my signature.
Sun Peaks website:https://www.sunpeaksresort.com/explore/sun-peaks-in-winter
Unofficial Guide to Sun Peaks:
https://www.SkiTalk.com/ams/unofficial-guide-sun-peaks-bc.149/
N

And they missed all the income from my Chocolate chip banna bread and coffee breaks (4.86) daily.
west of the flat bits

JShort said:
Practicing our steep skiing photography on Soudan Couloir (the angles may or may not be exaggerated...) The full run is here:
Click to expand...

Almost exactly the same line (and the same weather!) as the 2013 clip in your vimeo channel.
I liked this year's skiing better, though. More flow.

Wow, I read those titles wrong! Should have paid more attention.
Last edited: Wednesday at 7:16 PM

I was at W/B the last day of operation, crowds still there. especially on weekends and powder days. It probably seemed more crowded as lift efficiency was definitely compromised in light of Covid.
Whistler Blackcomb
You must log in or register to reply here.
Share:
Facebook Twitter Reddit Pinterest Tumblr WhatsApp Email Link