So I'm a LOOK guy, I'm happy to admit that. Thought I'd out my top 3 for the sake of discussion.

LOOK 77R is my all time favorite. ALL METAL everywhere. It probably came along at just the right time too when I was in my late teens. The R version was the last and best iteration of the Model 77 timeline which started pre DIN and transform into the new standard. The 77 R is a 4-10 binding. Some didn't care for the forward facing brake arms but I never had an issue with them. (I don't ski in scrub trees) Next up The RED Comp Nevada/Grand Prix with the heavy springs. Prior to these many racers were coming out of their LOOK's and were trying shimming the standard springs to stay in (maybe). This RED Comp solved the problem and became somewhat iconic in the early 70's. Pre DIN standard. And in third position the later 99RS. The earlier 99RS still had the brake up front, not part of the pivoting heel piece. My biggest issue is that these marked the beginning of PLASTIC in non structural places.(well sort of, the spring covers were kind of important!) These were 4-13 DIN. So there you have it! Please relate your preferences of the day and beyond... (I still ski all of these!

Look was my first binding and I sold a ton of them. I still have a pair of RS 99's with the toe brake although the brake goes the other way and I think that is a bit better.

It has been 2 or 3 seasons since I have skied them but I know that I could still twist out of them.

I remember when that binding was launched they called it the 99 world cup and were threatened with legal action so changed it to RS. I used them for a year and a bit like salomon race bindings with the old cross head adjuster thought I was super cool. They used to pre release a lot [short fwd pressure travel].

The N17 used to be a pain in the backside with those asymmetric aluminium heel shims where you had to move them about to get the right heel width
Coach, ski journo' and provider of the odd bit of snowsports intelligence.

I wouldn't go as far back as the bindings with the forward facing brakes nor a toe without any upward compensation so, the Z toe is a far back as I would feel comfortable with.

Here are two with their modern Pivot 15 counterparts: 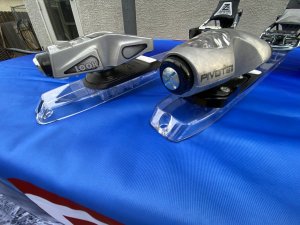 Had 99RS on my first race skis, Dynastar Course SL (with the anti vibration thingy on the tip).... a friend still has the 99RS (and 89?) poster that hung on my wall for years. So that is far and away my #1 Look retro product! 2nd would be some original Look clipless pedals
You must log in or register to reply here.
Share:
Facebook Twitter Reddit Pinterest Tumblr WhatsApp Email Link