coskigirl said:
Cracked this new to me varietal from a winery in Paonia Colorado tonight. I adore this winery and this wine.

Whole cluster. Rhone varietal. Paonia -- not even on my radar for CO wine.

Trifecta of weird. Did you find it locally in the front range?
Thread Starter
TS

jmeb said:
Whole cluster. Rhone varietal. Paonia -- not even on my radar for CO wine.

Trifecta of weird. Did you find it locally in the front range?
Click to expand...

I don't think it's that weird. A fair amount of my experiences seem to be whole cluster.

Tony S said:
I don't think it's that weird. A fair amount of my experiences seem to be whole cluster.

Sorry -- weird for CO winemakers. In fact, they seem to be growing a bunch of interesting grapes over there.

jmeb said:
Whole cluster. Rhone varietal. Paonia -- not even on my radar for CO wine.

Trifecta of weird. Did you find it locally in the front range?
Click to expand...

I did a long weekend getaway glamping in Paonia last month. I visited 6 wineries while there (2 additional ones didn't allow dogs) and tasted a lot. Storm Cellar was by far my favorite. They do all whites and roses which I love because while I like reds, they don't like me as much. To find a winery really focusing on doing interesting things with whites is nice. I learned today that the Roussanne just won a gold medal in the Governor's Cup Colorado wine competition. Their Rose of St. Vincent won double gold. They also have a rose with the perfect name for a Colorado rose. It's called Alpenglow.

mdf said:
Rockwall winery is a fun place to visit...
Click to expand...

+1 although the only time I was there was for a Valentine's Day party in 2015. I took my wife to try to make her feel better about me leaving for an extended, skiing roadtrip to Canada a couple of days later. Last Friday, I spent night at a winery in Rodeo, CA that is on the shore of San Pablo Bay (Northern part of SF Bay). I was not that impressed with most of their wines, but tasting area and where I parked for night had great views and my TV found over 50 channels. I bought two bottles of Petite Sirah as part of the deal for free overnight RV stay is to buy something.

Picture is my spot with Amtrak going by at left. I had no trains overnight and fog over Bay in background also did not move in. 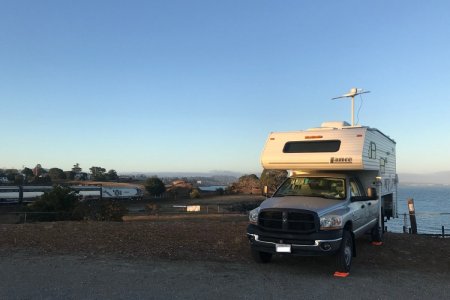 On the way there from Bodega Bay and Guerneville, I stopped at Petaluma Grocery Outlet. Besides the Pearl Hart Reserve (mentioned on previous page that we liked enough that we bought 6 more bottles in San Jose and one more in Petaluma), they had 2016 Rock Wall Solano County Papa's Syrah. This was another $55 value for $10. The back of bottle says it's "an homage to the way my awesome Papa loves to make wine...gigantic in flavor." Haven't tried it, but sounds like another big and flavorful wine and is 15.68%". Also for $5.99 I bought 2015 Three Rivers Columbia Valley Merlot based on recommendation of store's wine manager who said it compares to $35-40 Merlots and will stand up to many Cabs. I tried it after my tasting overlooking Bay and liked it and so did my wife the next day when we both got home, from different directions, the next day. 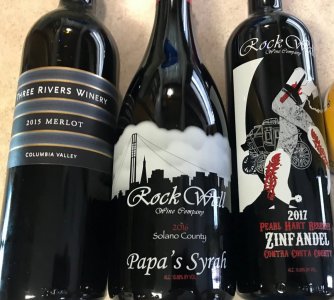 Tony said:
I was not that impressed with most of their wines, but tasting area and where I parked for night had great views
Click to expand...

Not going to lie.... there is nothing wrong with the wine, but they aren't exceptional. The experience is the reason to go.

mdf said:
Not going to lie.... there is nothing wrong with the wine, but they aren't exceptional. The experience is the reason to go.
Click to expand...

Just to clarify -- I don't want to overstate my judgement on Rockwall... I can be quite picky. I do like many of their wines, and have bought a few bottles. But for me it's the whole experience of sitting in the sun (well shade actually - I burn easily), eating food from the separate business that can best be described as a non-vehicular food truck, looking at the SF skyline that makes it a special place. Don't know what it's like post-covid.

We tried the Rock Wall Syrah tonight and it was good enough that we will try to go back to Santa Clara store where I also found it for more, assuming that South San Jose store does not have it. We had it with sausages with pasilla peppers that were part of a bushel we bought and had roasted on our way back from trip to Amador County last weekend where we stopped at four wineries, attended four music events, then stopped at our two favorite produce stands on way home. The Rock Wall Syrah compares with the $30+ Amador County Syrah we brought home. Picture is from Joes Chilie Peppers who has a FB page. Pasillas are the dark green peppers in front. The two bushels in rear are Anaheim or Fresno peppers.
. 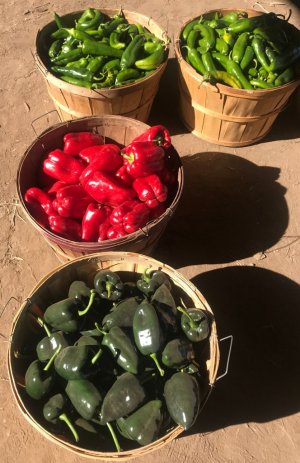