Pacific NW/AK/BC Whistler - When to go

I'm planning a trip to Whistler for only my second time there. My first was in 2010 right before the Olympics and the conditions were very poor. My group skis on & off piste blues and blacks. Can anyone give us a general rundown of what to expect in December, January, or February? Thanks in advance.

Hard to predict ahead of time. 2009-2010 was a tough year to the start of the season for everywhere in the PNW. OTOH I've been there for opening weekend around US Thanksgiving and it was amazing, powder for 3 days with increasing terrain opening each day.

You just have to have a tentative plan and book as late as you can, or book early with free cancellation. That said anytime after the end of December is a pretty safe bet, even if there isn't enough snow at the base, there's usually pretty good coverage in the alpine.
This space available for rent.

October was rarely open and it never is these days
November is usually just skiing because you want to say you did. Some years it's outstanding but that's not common. Now only opens for US Thanksgiving weekend which is late and best avoided.
December usually enough snow to ski to base by mid month and it's cheap but some of the alpine lifts might not be open. By 18-22th it's the Christmas crowds and every thing becomes over priced
January just avoid the American holiday weekend otherwise your good but will be busy on weekends and big powder days
February early used have our annual cold dry snap but that's become more unpredictable, crowds are similar to January
March lots of snow, great conditions possibly some holidays to work around
April my favorite up to 3rd week, lots of snow and more sunshine plus crowds are long gone by end of first week, One of the hills will shut down by 3rd week
May is iffy. Usually better skied on sunny days time the sun angles but have hit random powder days as late as May 24 when second hill closes
Glacier skiing starts up again June/July/August but best if your in a camp. Otherwise the limited hours of decent snow aren't worth the effort.
September is a great hiking month
Last edited: Thursday at 11:54 AM
west of the flat bits

From ZRankings.com echoing some of the comments above. Looks like anytime after December is a good bet, with late season being only slightly better. ... 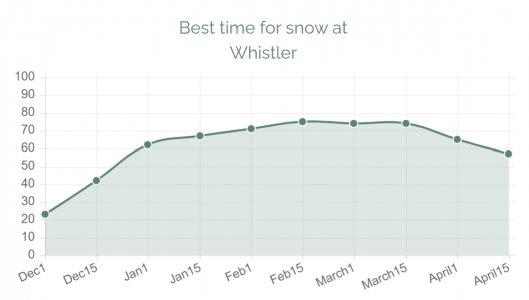 Ski resorts are not supposed to be shiny!

It wouldn't be high on my list from the standpoint of skiing. Simply put, it rains too much and the quality of snow is hit or miss.
N

no edge said:
the quality of snow is hit or miss.
Click to expand...

To add to my prior post, and this quote, here are both ZRankings graphs for best time for snow, and snow quality. Both are a scale to 100, where the scale is a relative ranking against all the other North American resorts.

For a comparison point, here're Alta and Snowbird, which have some of the highest snow rankings:

Ski resorts are not supposed to be shiny!

Most Interesting Man In The World

dbostedo said:
To add to my prior post, and this quote, here are both ZRankings graphs for best time for snow, and snow quality. Both are a scale to 100, where the scale is a relative ranking against all the other North American resorts.

For a comparison point, here're Alta and Snowbird, which have some of the highest snow rankings:

I can see Alta has a more effective marketing department than Snowbird.

March and April are great. I have not been there in other months.

Conditions have been variable when going those months. Generally you need to move around a bit to find the best snow. Where the best snow is a changing target as the day progresses. One day conditions were simply hopeless as a light drizzle had fallen on about 12" of powder. Next day, snow was great again. So, it does not surprise me if someone says the snow at Whistler/Blackcomb was bad on day XYZ. You're going to find bad snow somewhere on the mountain with 5000 ft of elevation change.

A powder day at Whistler would often be called a cement day at dry mountains. It really does rain there and that is not fun.

But I have friends who ski there anyways.

I respectfully disagree with no edge, I've skied all over north america, granted not dry as some but certainly not cement on powder days. You need to know where to go
Whistler Blackcomb
N

Not all over North America for me but I've skied almost everywhere in BC and Alberta and he's right.
west of the flat bits

Who is?
Ski resorts are not supposed to be shiny!
N