Next week, if it hits

I am a half fast skier.

SSSdave said:
Andy, like stopping to take a picture first before skiing down such smooth soft low gradient slopes like that. Then at bottom stop a second time to photo the result! So somewhat landscape dependent one needs to figure out a fall line looking down where a view back up works. As a smiling energetic lightweight creature, such pristine canvasses are where I can record my fun without Elmo's embarrassing crater.
Click to expand...

If I stopped at the bottom to take a photo of my work I'd have to skate to get off the flat. Suffice it to say when there is significant fresh snow you don't want to ski this little tilt of Earth.
My burning thighs may melt the pow.

What I hope is in all our near futures as we have suffered too much to this point for acceptable mental health.
2017 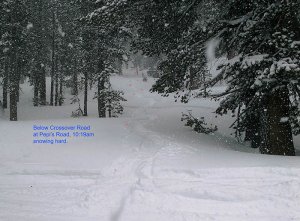 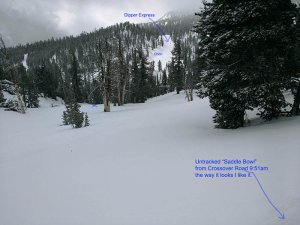 The 2 trunker from the lower perspective. 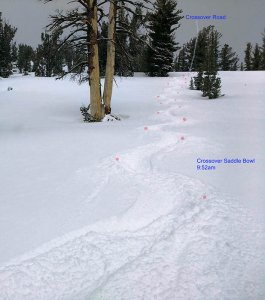 I have skied that line - there are so many like that all over the mountain - just need to look for them - which few people do - meaning more for us!
Skis - Rossi Experience 88 HD & Nordica Enforcer 100
Age - I remember driving over Loveland Pass before the Eisenhower Tunnel existed

The hilarious thing about the lines off Crossover Road is none of the great many that are speeding by have apparently ever bothered to stop along that long stretch because to reach lower Nevada areas one needs to maintain speed to avoid poling.

Philpug said:
Squaw was skiing quite well, when it wasn't in cloud. 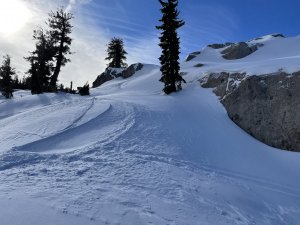 Squaw is still skiing very well, although a refresh is needed. Whatever snow is left though triggered some wind action on Headwall, and it was delicious.
Unofficial guide to Squaw Valley: squawguide.com

Happy New Year SkiTalk friends. May every day be a beautiful day!

Skied Rose yesterday. The leftover wind buff in the bumps was really really nice.
We didn't stay long because the lines got long and we decided to leave the slopes to those who are only able to get up to ski during the holidays.

We'll be back next week, likely skiing Squaw/Alpine for the most part as @Justin Koski will be in town.

BA's forecast looks decent but not quite the big one we heard about earlier. 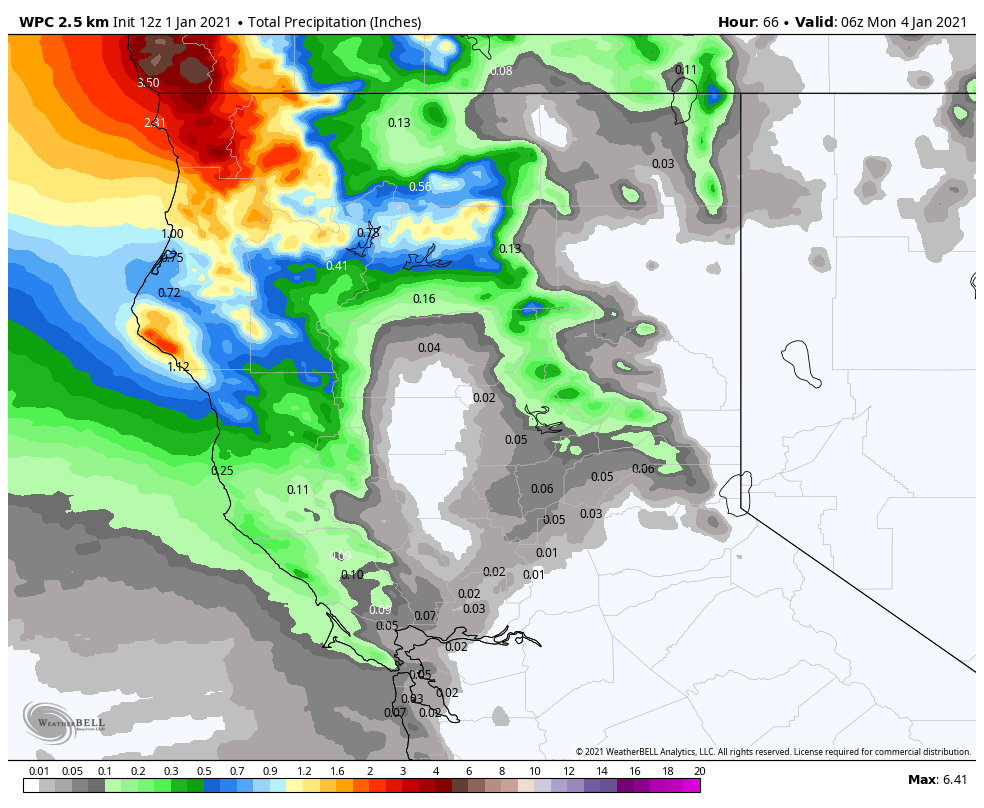 Happy New Year! Getting a little bit of a late start this morning from staying up to kiss the bride at midnight. It's a headb...
opensnow.com
Point your skis where you want to go.
If that doesn't work, go where they're pointed.
Bob Barnes
​

That is awesome!!
Woof!
Point your skis where you want to go.
If that doesn't work, go where they're pointed.
Bob Barnes
​

Per my earlier post, Kirkwood's forecast has dropped over this period from 51 to 18 inches. Additionally the whole Tahoe region will see higher snow levels meaning lower elevation slush though easier road conditions. Let's hope what's left actually plays out without totally evaporating as history has occasionally shown. Yesterday, KW opened Caples Crest and prepped The Backside. This morning chair 4 is on HOLD showing it is about ready to open. With more terrain opening across Tahoe given imminent storms this week, NS, HV, KW have apparently upped their quotas so are now showing reservation availability for all January days. That means at least weekdays we can delay commitments till just before dates. I may ski Tuesday dependent on what the Monday storm does.
5' 6" 132# ... 168cm Twisters ... 165cm Santa Ana 88 ... 155cm The Ski ... 173cm S7's ... RS110 SC
D

I made it out to Kirkwood yesterday. First time ever for me, wasn't disappointed (especially liked the backside and the bowls off of lift 6).

Backside was opened up mid-late morning, the runs off of lift 4 were quite nice. Some areas with light snow cover so perhaps it's still advisable to bring the rock skis.

Same was the case around Sentinel/Palisades bowls from lift 6, just the traverse across alone is light cover, but a decent amount of untracked snow out there if you're willing to work for it. Definitely would advise bringing a friend for safety, very few skiers out there. At least it meant the lines for lift 6 were non-existent all day.

By the time I made it (around 11am) to Zachary off of lift 6 (the groomed black) a lot of the snow was already scraped off by sideslippers and heelsiders. Felt like a classic east coast reasonably steep groomer filled with large areas of hardpack. If you're confident on the ice it's nothing out of the ordinary. Hard to carve arc to arc turns, maybe next time if I can catch opening bell...

Lift lines were long at lift 5 and timber creek (forgot the lift number, forgive me!) most of the day.

I didn't dare make the trek up lift 10 (the wall) yet, so can't report on the conditions there.

I'll be making the trek to Northstar tomorrow after a long-overdue bootfitting at Start Haus in the early morning. Should be there by 10-1030, hopefully the snow and lift lines are manageable.

The day at Squaw turned out to be more miserable than I expected. Mist in the morning, drizzle by midday. The snowpack is getting hammered, hopefully it will be cold enough this coming week for the precipitation to fall as snow.
Unofficial guide to Squaw Valley: squawguide.com

Alexzn said:
The day at Squaw turned out to be more miserable than I expected. Mist in the morning, drizzle by midday. The snowpack is getting hammered, hopefully it will be cold enough this coming week for the precipitation to fall as snow.
Click to expand...

Sounds like we didn't miss anything. Mist at Squaw, wind & flat light at Rose. It was a good day to do 4th quarter expense reports.
If you want SkiTalk.com stickers, send me a PM.​

Started out flat light and foggy. It got misty/"humid" at around 11am. The kind where it's not raining, but but the end of the run, your goggles are coated. Light drizzle by noon, and then at around 12:30, it was r.a.i.n. I stopped skiing right about then.

The groomer skiing was still pretty good in the morning. Snow hadn't soaked yet and was skiing well.

Clip from Bashful on West Bowl, just as it was transitioning to a drizzle.

Alexzn said:
The day at Squaw turned out to be more miserable than I expected. Mist in the morning, drizzle by midday. The snowpack is getting hammered, hopefully it will be cold enough this coming week for the precipitation to fall as snow.
Click to expand...

Thanks everybody for making me feel better about missing the season as I shelter in place in the bay area.

Edit: not sure why.. they deleted the old tweet and put a new one up that basically says the same thing-

I am a half fast skier.

Well, that makes that decision easier!
My burning thighs may melt the pow.