Exclusive: Hey Look, Thanks for Listening and Bringing Back the Pivot 15

One of the earliest promotions here at Pugski.com was to "Bring Back the Pivot 15." We started this campaign in 2016 to accomplish a few things. First, we wanted to showcase the talent and artwork of Dave Petersen; we also wanted to have fun with collector, historian, and Look aficionado Bill Talbot and his love of the Pivot 15 binding. But our main focus was to show Look that there is a loyal following for a product that it had discontinued more than a decade before.

​
Within hours of launching the original campaign, I received a phone call from Rossignol Group’s senior management. They thanked us for supporting the brand and told me they would be tracking the outreach. The visibility of the promotion was impressive, not only on Pugski.com but also on Facebook and other ski-related sites; the campaign went global and running with the hashtag we created, #bringbackthe15.

We saw that Look was taking the concept seriously two years ago when it brought back one of our designs, the yellow-to-orange Forza motif, on both the Pivot 14 and Pivot 18. The Forza was an immediate sales success, and we couldn’t go a day on the slopes without seeing a few pairs out on the hill. One of our loyal readers who works as a retailer commented that whenever someone asked specifically for the Forza, he knew they had heard about it on Pugski.com.

Why the push to bring back a binding that was discontinued a decade ago? One that might only sell into the hundreds, not nearly the volume of some of the more popular bindings? Simple: people are willing to pay for quality and durability in a proven all-metal housing. Look already offers the Pivot 14; with a similar setting of 5-14, it retails for $70 less than the upcoming Pivot 15, which will retail for $399, the same price as the burlier-springed Pivot 18. We have said many times, "When you are buying a better binding, you are buying not a bigger spring but a better housing”; since the 15 and 18 have identical all-metal housings, it makes sense that their prices would be identical.

The vast majority of adult skiers have a binding setting below 8, which is where the Pivot 18 starts; the Pivot 15 will be the answer for those skiers who may not weigh a lot or have a higher-than-average binding setting but still want the best-built option available. Look understands that the highest performance does not need to be limited to those who require the biggest spring; this is why the Pivot 15, with a reasonable setting of 6-15, had such a loyal following and was hoarded by better skiers all over the world. 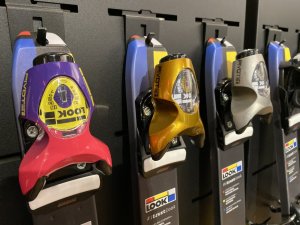 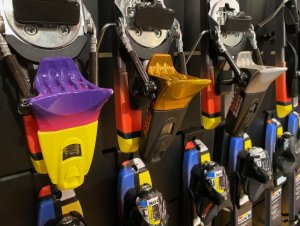 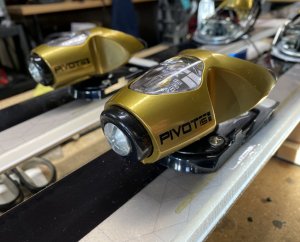 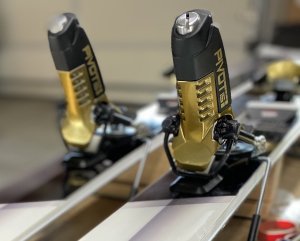 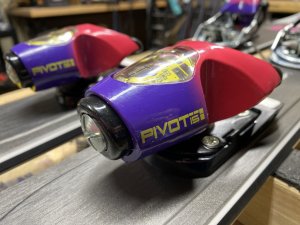 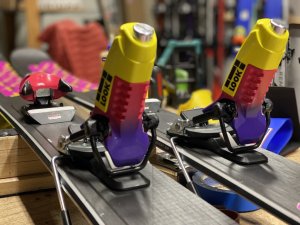 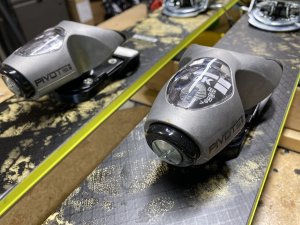 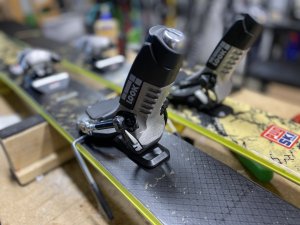 Raw​
For 2020-21, Look will be offering the Pivot 15 in three colorways. It will continue the Forza 2.0 motif with an all-new purple-to-fuscia fade with yellow accents, Gold to be paired with Dynastar’s upcoming M-Pro series, and Raw, an unpainted version to highlight Rossignol’s new Black Ops collection. Like the Pivot 18 that carries over, the reintroduced 15 will be GripWalk-compatible and come in 95, 115, and 130mm brake widths. We look forward to seeing these new offerings out on the hill. It is very satisfying to know that Pugski.com and our readers' voices were heard and that Look as a brand listened to its customer base. Now, call your favorite retailer and let them know, "If you stock it, they will come."
Reactions: alexflexy, peterm, Michael V and 7 others
About author

Will/is the toe hole pattern the same at pivot14? I guess I could go look at the jig, but never paid attention to the Pivot18 toe holes
on the gram = roblkendrick
Nice! Congrats on the campaign. Very cool!

Now, do the same with the PX 18! For all the racer kids who destroy the 15’s.
Me, I just despise stepping into the 15. Plenty of other race skis to move on to.

givethepigeye said:
Will/is the toe hole pattern the same at pivot14? I guess I could go look at the jig, but never paid attention to the Pivot18 toe holes
Click to expand...

Yes, same hole pattern.
If you want SkiTalk.com stickers, send me a PM.​
Those purple ones are sporty.
on the gram = roblkendrick

oldschoolskier said:
That’s not good as you don’t get the same toe as the 18. The difference between the 14 and 15 was the toe.
Click to expand...

The 15 IS the same toe as the 18...that was the whole idea with the campaign. Look at the pics
If you want SkiTalk.com stickers, send me a PM.​
Finally! I have only been dropping hints all over these forums. Enjoy everyone!!

Philpug said:
The 15 IS the same toe as the 18...that was the whole idea with the campaign. Look at the pics
Click to expand...

Then would’nt the mounting be similar to the 18 and not the 14?
#skithepivot15

oldschoolskier said:
Then would’nt the mounting be similar to the 18 and not the 14?
Click to expand...

The 14 and 18 and all of the pivots with 4 screw hole patterns are identical.
If you want SkiTalk.com stickers, send me a PM.​
Awesome News and Great Job Pugski

E8 USN-Retired
When will these roll out to retail?
(or better yet MAP sales from one of our sponsors!)
Well, that is quite an success. Now I can stop searching and hunting down those old 155s. Thank you for starting the effort - and thanks to Rossignol for listing.
!!!
Why no narrower brakes? Especially with the surge of sub-90 all-mountain and sport carving skis? It seems a 95mm brake would be hanging pretty far off an 80mm ski.
Finding out that bike legs don't necessarily translate to ski legs.

Bill Talbot said:
When will these roll out to retail?
(or better yet MAP sales from one of our sponsors!)
Click to expand...

^yes, this
on the gram = roblkendrick
Any idea when these will become available?

tomahawkins said:
Any idea when these will become available?
Click to expand...

These are set for fall release. The person who has these was probably given them because they are an influencer but chanses are this person will never see another early release product again now.
If you want SkiTalk.com stickers, send me a PM.​
They are in some online stores now.

All new this year is Look's Pivot 15 GW Ski Bindings and they bring everything we love about the Pivot in a new DIN Range of 6-15. Using Look's well-known elasticity the Pivot features their turntable heel for supreme lateral security while 180-degrees of multi-directional release helps the...

www.evo.com
on the gram = roblkendrick
It's amazing how good technology and design can last. The first set of bindings I ever purchased, in 1977 I think, were Look 77's. Other than a few minor enhancements the bindings are largely the same now as then, especially the turn-table heel piece.